What do you say to a man who is on his 6th Run For Office? He served two terms in AD-33, then Ran for Governor and is on Run #3 for Congress.

Dear Readers, you have express permission to use the official Right On Daily Tim Donnelly Logo

I had a hand in helping give content to the creators of http://dirtydonnelly.com/ To the creator of the site, I will gladly host it for you as a permanent record of what a fraud Tim Donnelly is.

I was told many years ago that Tim Donnelly owes a lot of people money, most of whom he has not paid back. One victim went on camera to tell her story.

Tim Donnelly has a criminal history that includes a felony, two misdemeanors, theft of his wife’s property, and (likely) a DUI.

There is a variety of additional info on Mr. Donnelly – failed statewide referendum, misconduct with campaign staff, financial improprieties related to his radio show and the failed campaigns. I’ve  written about Tim Donnelly for years – but it appears that Tim Donnelly is indeed as insane as in diagnosed him to be in 2014 when he was running for governor.

He appears to have no shame at all – Tim Donnelly CA-08: Grifter Alert Issued 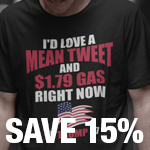