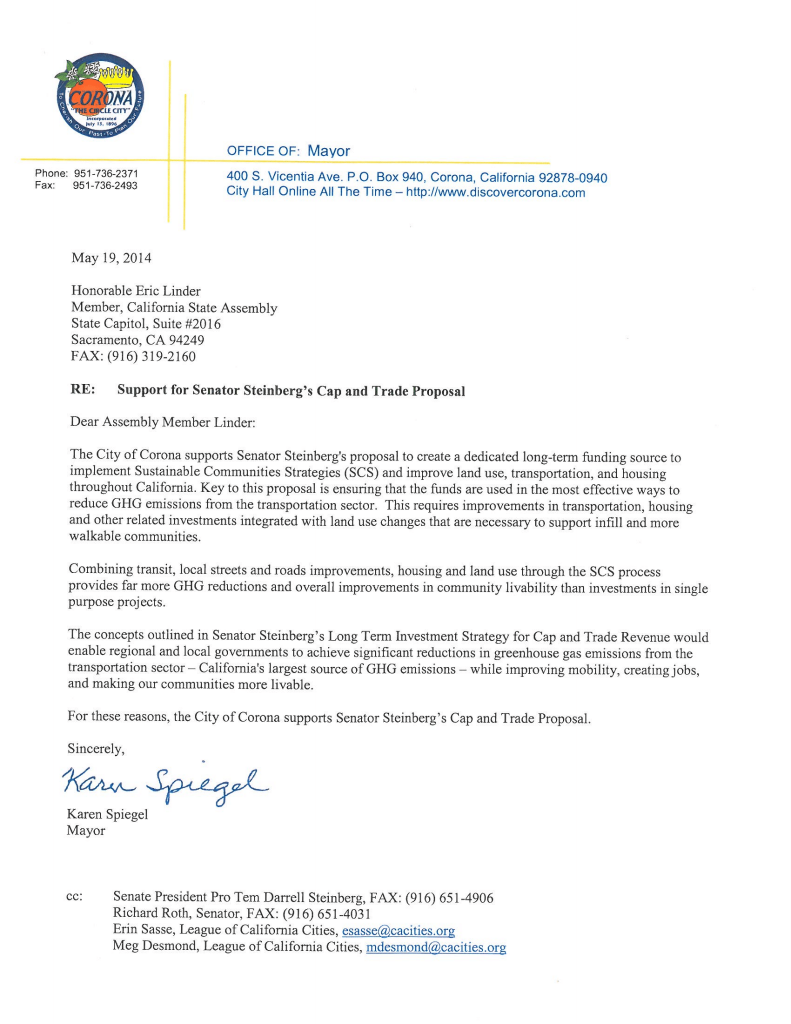 Chad Mayes, Arnold Squishenegger, John “Triggered” Kasich and their Ilk would be proud. (Maybe not so much over SB1 and High Speed Rail Support but I digress).

Gax Tax / Cap N’Karen Spiegel is starting to look at lot like Sabrina Cervantes these days. Maybe Spiegel has always been a flaming liberal and has been lying about that too?

Did Karen Spiegel forget what she sent her opponent, then Assemblyman Eric Linder???

Is there a tax hike Spiegel didn’t like??? (Hey that rhymes)

All this and Spiegel is a warm and cuddly councilmember that was subject to a recall! Perhaps this is why she wants to build a bridge in to downtown and close down a bunch of businesses while thwarting the process?

OR – you can support Eric Linder whose record in the Assembly is solidly pro-taxpayer and pro-business (even when people aren’t looking).

Well, here is another one. Klang voted to eliminate one of the better standardized math curricula that was being used in the Rocklin USD. I remember well his talking points against national curriculum and the like.

The problem is that the way he went about implementing the change was a disaster and the replacement curriculum did not work.

In addition to his run and gun war with the local teacher’s union, he also picked fights with parents.

The sad part is that Rocklin Schools are as good as it gets in California. You basically have to move to another state to find better schools – this is why my criticism of the Rocklin School Board has been limited to their documented hostility (in the past) towards Charter Schools.

Klang’s behavior was one of the main reasons why the Rocklin USD was so anti-charter for so long. Klang had been tied to the Charter movement via the late Joe Scharrer of website fame.

In those days, I used to write a blog on the defunct Red County Placer, and Klang had his own blog where he was slinging bombs at everyone in office in Placer County.

It has been interesting looking at these old articles to remember the chaos in an otherwise outstanding school district. I also remember being skeptical of the critics of the Klang-led replacement of the math curriculum.

The 50 point drop in average test scores speaks for itself. It appears that Klang is running for Rocklin School Board again to be an agent of chaos. Oh, and the Charter Schools people? They endorsed other candidates. Ouch. 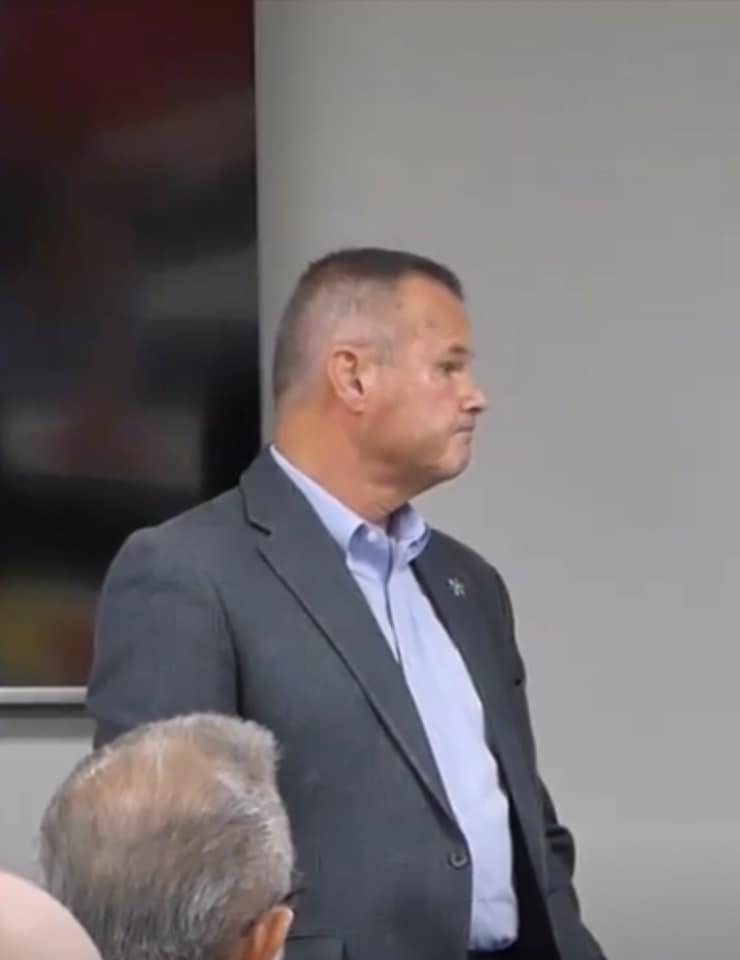 Every Time I think I have heard the worst about the corruption and day to day disaster in Stan Sniff’s Riverside Sheriff’s Office, I get contacted with more.

A confidential informant sent me the following:

Hello Aaron,
I wanted to inform you about issues in the Forensics bureau.
-Former superiving forensic technician Elizabeth Acosta was terminated for dishonesty a few months ago.
– No department wide email was sent to inform staff members of her no longer being employed with RSO. Also, the gate code to Perris station was not changed, per station policy.
– Elizabeth Acosta’s husband and RSO deputy at Moreno Valley Station was promoted within a week of her termination.
– Elizabeth Acosta had a romantic relationship with her immediate supervisor, Lt. Paulson. Elizabeth received preferential treatment and treated forensic technicians poorly. Four forensic technicians resigned under her watch.
–  Elizabeth Acosta was also involved in a sexual relationship with former Perris station Captain and now Chief Deputy Ford. Chief Ford made sure to promote her husband in order to keep her quite.

I did not edit the email I received. This references several issues, an abusive supervisor in the Forensics department that was terminated for dishonesty. (Not specified by the source what the nature of it was) It references Lt. Paulson and Christopher Brandon Ford having affairs with this supervisor. Ford is one of Stan Sniff’s hatchet men who came on to my radar when he appeared at multiple Chad Bianco events.
–
Remember – Stan Sniff said any talking about morale was just an election year ploy. (Just like the lawsuit over his CCW issuance habits and the expose’ on the Kevin Duffy Serial Child Molestation Scandal)
–
I have been made aware of a huge scandal at the Southwest Jail. A whistleblower (known to me, but I will not be naming the person just yet) came forward with documentary evidence appearing to prove that department employees are arriving late, and leaving early despite being on the clock. When the whistleblower came forward with the issues – predictably, they were retaliated against.
–
There’s that name again. Captain Nordstrom who is retiring in December has been making sure that this non-sworn officer has been receiving abuse at the hands of employees who have been
ripping off the taxpayers by allegedly falsifying their time cards. In the past Captain Nordstrom is alleged to have tied or handcuffed one of his children to their bed and was investigated for child abuse amongst other things, so why wouldn’t he be a raging asshole to a whistleblower? He has certainly demonstrated the character required to be in management for Stan Sniff. I say good riddance when he retires, but he should be prosecuted if half what I have heard about him is true.
–
Meantime, the supervising Sgt. who is alleged to be ripping off the taxpayers along with several others should all be hauled in front of PSB if they actually gave a damn about ethics. At least one of the Sgt. there likes to go work out in the middle of the day while on the clock so he should be easy to catch. He is not alone.
–
Lt. Magnan Update. Magnan as you recall was on a rampage over your Intrepid Blogger learning about the STILL BROKEN GATE at Lake Elsinore. (This is the Home of Queen Anne) – Magnan tried to lynch deputies who he thought were talking to your intrepid blogger.
–
The department currently is “PERS-ing” at least 25 employees for suspected collaboration with your intrepid blogger (but what they are doing is saddling up on minor violations of policy in other areas while everyone knows full well this is a fear and intimidation tactic)
–
Well Magnan is covering for an incompetent trainee in a program. Apparently, this trainee has been in a program that should take 16-20 weeks for a staggering 29 weeks. The deputy is on a “Performance Improvement Plan” which is the last step before washing out.
–
All of the man’s FTO’s (Field Training Officers) have recommended he be removed. (Remember my criticism of then Lt. now Captain Shields over the kid injured in the motorcycle accident that he should have pulled off the motorcycle? This is similar, albeit with less risk of physical harm) Lt. Magnan is now the man’s FTO – which is unheard of for a Lieutenant.
–
The kicker – the Deputy is Magnan’s best friend and fishing buddy. Perhaps the Reverend Lt. Kevin Smith can pray for this guy if he hurts himself…
–
The lack of judgement and management failures encouraged and tolerated under Stan Sniff are endemic and need to stop. Chad Bianco has himself an absolute mess to deal with. If Sniff is re-elected, he will destroy everyone in the department that supported Chad Bianco while the citizens of Riverside County will suffer further deterioration in law enforcement.

Mark Klang decided to engage in open warfare with the Teacher’s Union in Rocklin. The part that is a problem? In a letter to the editor, he told teachers that disagreed with him that they could go teach in another district. #EPICFAIL

Given all the negative things I have to say about Unions, this is certainly NOT how I’d handle a disagreement. I’d prefer to work things out in private.

Most voters would not respond well to this approach. Remember, Klang is a retired military officer that did not get past the Rank of Major (O-4), hence the name “Major Klang”.

You can expect more of the same sort of dumpster fire politics from Major Klang if he is returned to office.

Then, there is the case of the two teachers Klang wanted to lynch without due process.

One teacher sent out an email on the district’s email system advocating political positions. This is indeed a big no-no. (Remember, I torched Rene Aggielairuh for this a few years ago)

Klang’s solution was simple for these teachers that had never been in trouble before – terminate them. One of my biggest issues with the Teacher’s Union and their web of control in the State of CA is that it costs about $250,000 to fire a teacher.

One of the biggest issues that Governor Arnold tried to address (before he folded like a girlie man) was Teacher Tenure. It is, however, the law. And Klang suggested exposing the RUSD to unlimited liability and $500K in immediate cost because he was mad over the opinions in an email that he did not like.

Banning Back to School Night.

Go work somewhere else if you don’t like it.

Screw up once and get fired.

Even a union as wrong as often as the Teacher’s Union is deserves better than that. So does the rest of Rocklin.

As a final note, Klang attempted to blame the Teacher’s Union for the actions of the Teachers. They had nothing to do with it. This is similar to blaming President Trump for the idiot sending out fake Pipe Bombs, or blaming David Duke (or Ron Paul) for the Synagogue Massacre. Klang knew better, but he had personalized his disagreements with the Union and went off the rails.

Given that I worked with him for a number of years after he was off the school board, including his aborted City Council run in 2010, I have little reason to believe that this angry person is any different today than he was in the early 2000’s. Beware. 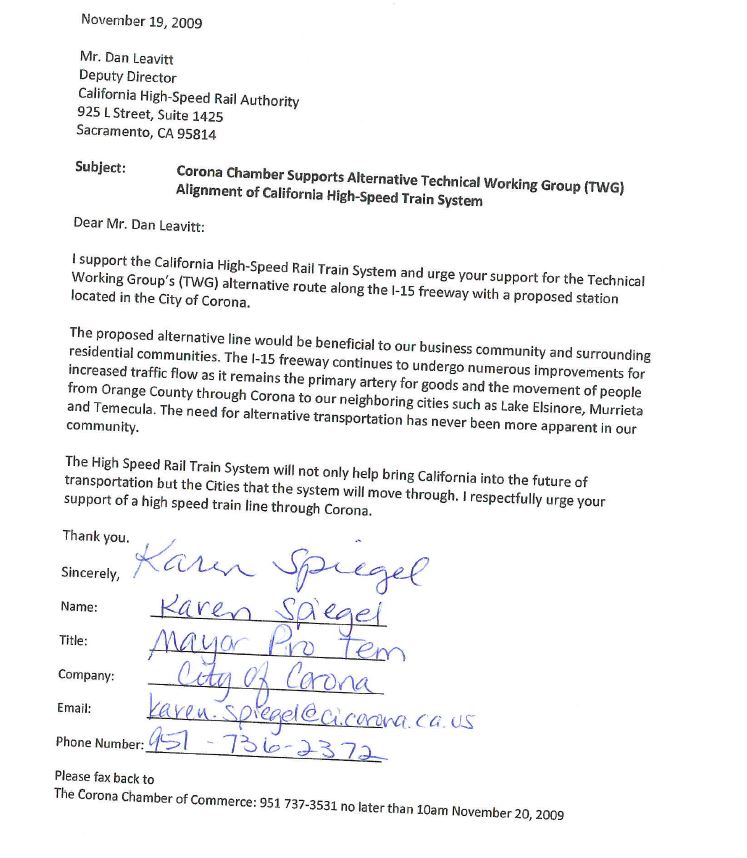 Remember Jerry Brown’s Ego-Legacy Train that is now projected to cost over $100 Billion?

Well, when Karen Spiegel thought there was a chance it would come to Corona, she signed up for it!

Note that the Corona Chamber of Commerce (where here Husband served as President recently) is on the bottom of the letter. Still Cozy.

Soooo, we have SB1 the Gas Tax and Car Tax… now we have the High Speed Rail Boondoggle.

The California bullet train project has cost state taxpayers an average $3.1 million a day over the last year — a construction spending rate higher than that for the Bay Bridge, Boston’s Big Dig or any U.S. transportation project in recent history

In order to hit its 2033 deadline and $77-billion budget, the California High Speed Rail Authority will have to increase daily spending by up to nine times over the next four years or risk putting the already-delayed system further behind.

Russell Fong, the authority’s chief financial officer, acknowledges the goals will be difficult to achieve.

Whoops. Will she support wasting the money of the Riverside County Taxpayers like this too???

Read the rest of the LA Times article HERE.

It was supposed to cost $33 billion and eventually reach from Sacramento to San Diego. Now, the route connects only San Francisco to Los Angeles, with the completion date pushed back 13 years.

It was perfectly fine to waste billions of tax dollars when the project was coming to Corona, right? 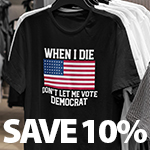